I returned from a quite fantastic holiday and found Pam the Platy dead at the surface of the water. I couldn’t see any signs of illness (other than the being dead part) and just her tail had been nibbled. She had a fuzzy coating of mould where one side of her body was exposed to the warm damp air at the top of the tank. Yuk.

The same day we noticed that Mr C the dwarf cichlid was looking pretty awful. He had a white-ish patch which looked like a lump on his head and one of his eyes was protruding. The next day he was dead. There seemed to be a small dent in the white patch on his head. As usual with this fish keeping lark, I will never know what the problem was but perhaps a burst tumour, or conditions such as ‘popeye’ or ‘hole-in-head’ disease? Errr.

Mr C was such a handsome chap and I’d definitely get more cichlids in future as their behaviour is fascinating.

The pictures are of the late fishies in life! 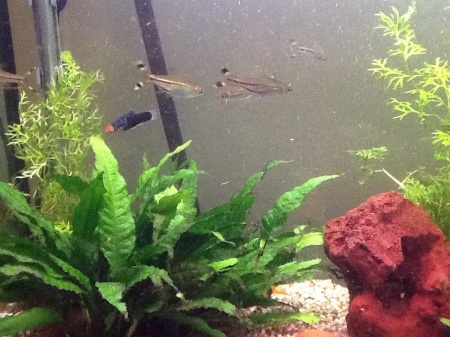